According to Astrology, August Will Finally Rejuvenate Our Inspiration and Bring Warmth & Relief

As predicted before it happened, the month of July so far has been volatile and emotionally explosive. At least this is my personal experience, maybe you don’t think the prediction was accurate. 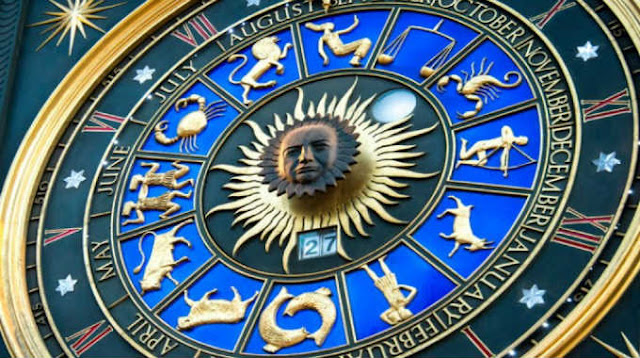 But next month in August, I think people’s inspiration collectively will finally resurface again after the devastating energy of 2016 (which I believe to be caused by Saturn square Neptune and certain astrology aspects that haven’t occurred since 1989).

In August, when the eclipses in Leo and Aquarius occur, they will make positive aspects to the planet of thinking, sparks of inspiration, ideas, activism, ect: Uranus. Not only will they positively aspect the planet of thinking and learning, but Leo and Aquarius are the signs of creation as is: Leo is about creation, skills, arts, the Sun, music, and life as a whole: Aquarius is the sign of Uranus, of thinking, learning, ect.

For once, we will have a month of better energy. First it will start off calm and uneventful: then the first eclipse a week and a half into August will intensify feelings of warmth and general good energy in the air.

Deep heart and empathy (Venus in Cancer), calm and reserved thinking (Mercury in Virgo), warmth and good spirit (Sun and Mars in Leo), and other factors are sure to make this month relieving.

In the early days of August, the air will be much more calm, quiet, and relaxed than it was during the month of July. Reserved, quiet Virgo energy will be flowing through people’s minds (Mercury). Sunny, warm Leo energy will be flowing through the Sun and Mars, and Venus will lightly increase people’s empathy being in Cancer, culminating to a peak of spiritual, empathy-rich energy when Venus trines Neptune. 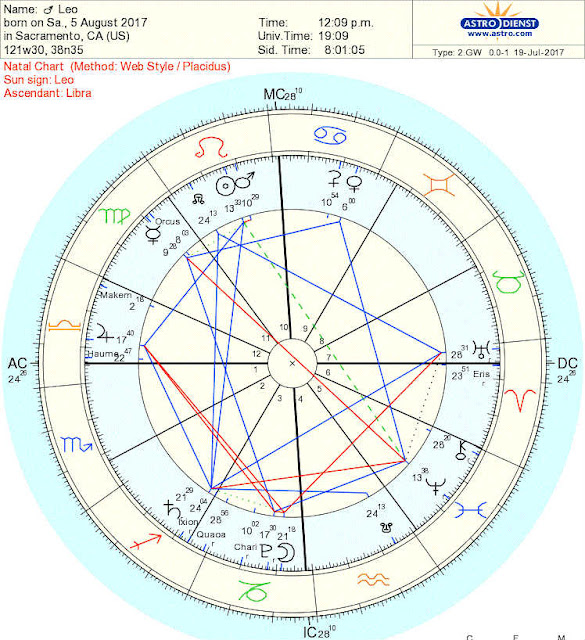 Leo energy is very pleasant to feel in the air every August, and Sun conjunct Mars in Leo is the epitome of warm, human, grounded sunny feeling.

Leo squares Scorpio, and is essentially the antithesis of dark, scary energy: so people who are disturbed with the darkness in the world or the dark side of truth are sure to be relieved during this time.

If the reality of the world has you disturbed right now, it will certainly be alleviated in August. However in the middle of the month, that dark-truth energy might briefly resurface when Jupiter square Pluto peaks, and when Venus opposes Pluto.

The moment of calm will culminate into a warm, human, once more kind of inspired and grounded energy on the eclipse August 9th. It will be a Full Moon eclipse in Leo and Aquarius. A full article about this eclipse is coming soon. People’s inspiration and warmth will noticeably increase after this eclipse.

Then, Mercury in Virgo will make a positive sextile to Venus in Cancer, and this health conscious, empathic, animal loving kind of calm energy will nicely compliment the sunny Leo energy.

The week after the first eclipse will be a particularly great week: the Sun and Mars will make one of the most positive aspects in astrology, sextiles to Jupiter. At the same time, people will get a surge of empathy, love, spiritual type feelings and things like that when Venus in Cancer trines Neptune in Pisces. This will probably be the nicest week people have collectively felt in a long time.

However, there’s one strange, Scorpio/Pluto-like, darkness filled aspect that will strike for the final recent time this month: Jupiter square Pluto. This is a brief moment of darkness (Pluto) coming to light (Jupiter). 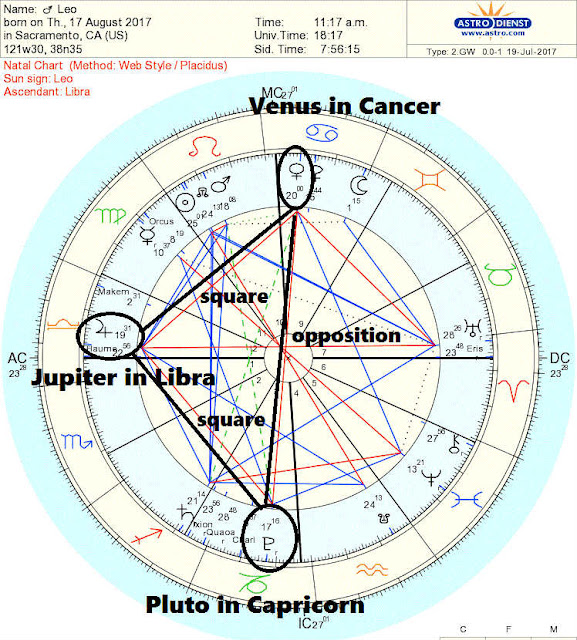 Jupiter square Pluto is the aspect that peaked in November 2016, with all the planets in Scorpio, when “pizza-gate” started blowing up and all that type of stuff (whether or not you find truth in that, the aspect causes darkness to come to light and explode to the surface).

Unfortunately there might be some kind of flood of “darkness” to the collective consciousness in mid-August, either darkness being exposed or just being prominent in the air or something along those lines, when Venus in Cancer opposes Pluto and squares Jupiter, agitating the Jupiter square Pluto.

Then, the Mars sextile Jupiter will smooth things out with general good feelings, and Mercury will start retrograding in Virgo opposite Neptune, adding watery, spiritual Neptune energy to the air (not so negative retrograde).

Finally, on August 21st, the great New Moon eclipse will occur. This is a really special moment that could signal a return of many people’s inspiration, particularly thinkers, activists, ect. (all Uranus type people). The most important thing to understand about the eclipse is probably the fact that it exactly trines Uranus.

This is a blast of electricity, inspiration, the spark of idea, activists’ inspiration, thinker energy to everyone on Earth at once. The eclipse and Uranus are both at exactly 28 degrees Leo and Aries.

Also serendipitously, Mercury is conjunct the dwarf planet Orcus on the eclipse: we don’t really know what Orcus does, but astrologers believe when Mercury conjoins a dwarf planet, it brings some far out, usually untouched energy from deep in space out to the front of our minds. 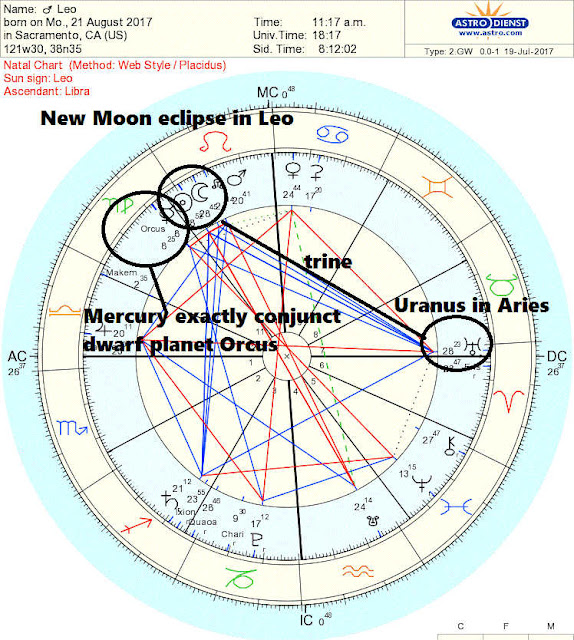 The eclipse is exactly trine Uranus: positively flooding the air with electric thinker energy, the activists’ energy, the inspiration and spark that people have longed for the rejuvenation of.

To prolong the thinker’s energy and the spark of inspiration, but in a volatile way, Venus will leave Cancer squaring Uranus a few days after the eclipse.